One of the earliest settlements in Randwick, it includes a number of mid nineteenth cottages and stables buildings associated with the horse racing industry.

The Struggletown Conservation Area consists of several Street blocks of housing and stables between Young Street, Barker Street and Botany Street in Randwick. 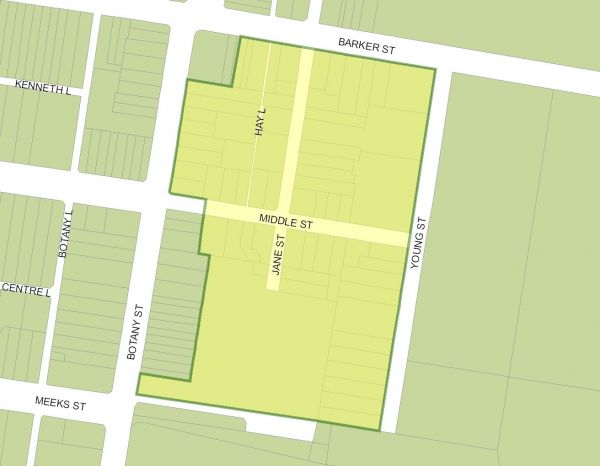 What is the Area’s significance?

Many of the buildings in the conservation area are single fronted waterboard, stone or brick Victorian Georgian workers cottages. There are also cottages from the federation period, in Bungalow or Georgian style and the inter-war period.

There is a small grouping of federation and inter-war period shops, at the corner of Barker and Jane street.

The range of housing types and styles is complimented by stables buildings, often at the rear of sites. The Newmarket complex, on the eastern side of Young street, is not in the conservation area. However, the trees and buildings on the site, including the big stable, and the main residence, make a major contribution to the visual amenity of the conservation area and its character as a precinct for the horse racing industry.

The conservation area has historic significance as one of the earliest settlements in the Randwick City area, and its connection with Simeon Pearce. Pearce created a market garden here in 1850’s. Stone cottages were constructed by Pearce for his workers from the late 1850’s onwards. Many of the early inhabitants were domestic workers who were employed locally by middle and upper class residents of Randwick. St Judes Mission Hall, on the north-east corner of Jane and middle streets, was built on the land granted by pearce for the building of a church for the local community.

In the 1860’s Struggletown became a centre for the horse racing industry. More Stabling was introduced into the area when the Sydney Omnibus Company moved its operations to the Newmarket Complex, in 1870.

The primary uses of the consevation area for housing and the horse racing industry, have continued throughout the twentieth century. The Randwick Equine Centre, on the the north block between Jane Street, Middle Street, Young Street and barker Street, is currently the largest horse racing establishment within the conservation area.

The conservation area has a social sigificance for the local residents and the wider Randwick community. The area is well recognised for its streetscape qualities, its rare Victorain period workers housing, and its long term associations with the horse racing industry.

Ready to book an appointment?

Give us a call today!

To all of our wonderful clients, we are very pleased to let you know that we are now able to revert to our previous opening hours of 7:30am – 9pm during the week for your convenience.

Due to the current COVID-19 situation causing unexpected staff shortages, combined with being extraordinarily busy and the toll this is taking on our staff, there may be some last minute changes that are unavoidable, and we ask for your patience in allowing us to maintain the same level of excellent care you have come to expect from us:

We may have last minute opening hours changes if we are unable to staff the clinic.
We may ask clients to reschedule or delay non-urgent procedures or consultations at times if necessary.

Please try to book routine appointments well in advance and to not leave your pets too long before contacting the clinic if unwell so that we can try and squeeze you into the schedule as soon as possible.

We thank you all in advance for your understanding, patience, and kindness during these difficult times.